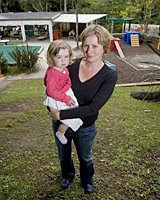 Louise MacLeod with her 2-year-old daughter Alice at Titirangi Kindergarten.

Parents say they will pull their children out of a Waitakere City kindergarten to keep them away from "killer rays" if a planned electrical substation is built next door.

Louise MacLeod is among the parents of 90 children at Titirangi Kindergarten who are protesting against Vector's plans to build a substation 30m from the centre, which is attended by children aged 3 to 5.

Mrs MacLeod, whose son attends the kindy, says many parents are planning to take their children out of the centre if the station is built because of health risks.

"Research has shown that high levels of radiation have links to childhood leukaemia," Mrs MacLeod said. "They [Vector] have said the electromagnetic frequencies is like having an iron on. A full substation? No.

"Nobody is going to be an idiot and put their child there."

The report, which was written to advise the British Government on policies relating to electromagnetic frequencies and health, showed that high exposure had links to various illnesses, including childhood cancers, adult leukaemia and miscarriage.

"In New Zealand you can live under a pylon and it's okay. But it's not okay," Mrs MacLeod said. "You don't put pylons or substations near a school. I'm just staggered by [Vector]. I just can't believe how stupid they are."

Waitakere ward councillor Paul Mitchell acknowledged that the site was designated for Vector in the early 1980s. The kindergarten was established in 1973.

"I'm no expert on rays and magnetic forces and things - I don't think anyone knew about that back then - but it's certainly a concern."

Mr Mitchell said the city council was working closely with Vector to find an alternative site. "The community doesn't want it there and I tend to agree. If they can get it out of the town centre, that would be good, but it's proving difficult."

Head teacher Amy Drinnan said she and her staff were unable to comment on behalf of the kindergarten, but as a member of the community, she was "gutted".

Links with EMF levels and child cancers were what was most alarming, Miss Drinnan said.

"There was a big case in Massey a few years ago linking EMF with child cancer. We will stop at nothing [because] it's kiddies involved and it's sickening. It's children's health here."

In 2002, Cameron Duncan was diagnosed with cancer. He died the next year, aged 17. His mother, Sharon, says she still believes that a nearby electrical substation and a pylon at Cameron's old primary schools in Massey, West Auckland, were a key factor in his death.

"There was a pylon down on the field. There was a substation right behind his second school. That substation will fire out EMFs and you'll get a couple of melanomas, a couple of cancers and deaths. Why do we need them to be built so close to younger bodies? Next to a kindy? There's plenty of bush out there - stick it out there."

Five neighbours and at least five of Cameron's schoolmates were diagnosed with various cancers, which had led to deaths and serious health problems among others, Ms Duncan said.

"Linesmen have installed powerlines and said to me, 'Yep, they definitely throw out EMFs.' Killer rays, that's what they call them."

A Vector representative confirmed that a substation was being planned at the 515 South Titirangi Rd site, but said 16 alternative sites were being considered because of the concern within the community.

"We are doing our best to take account of these concerns and Vector's objective to provide a reliable and safe supply of energy to the area."