Cell phones could give you thyroid cancer

Many thanks to Margaret for alerting us to the article entitled "Thyroid cancer increase puzzles experts", which describes the mysterious increase in thyroid cancer in recent years. However, the authors make no mention of a possible relationship with cell phone use and appear to have missed the "elephant in the room".

Cell phones could give you thyroid cancer

The thyroid gland is in the neck, and very close to where people hold their cell phones. Many studies have shown that cell phone radiation can damage DNA in living cells and we should not be too surprised if it were also to damage the DNA in the cells of the thyroid gland and give rise to thyroid cancer in some people.

Cell phones may make you fat

However, this is only half of the story. DNA damage in the thyroid is also likely to cause a partial loss of thyroid activity and result in hypothyroidism, one symptom of which is obesity. It is therefore possible that the present epidemic of obesity could be due to exposure to cell phones, cordless phones and other sources of non-ionizing electromagnetic radiation.

The effect may be irreversible

According to Vesna Rajkovic, Milica Matavulj and Olle Johansson (Journal of Experimental Biology 209, 3322-3328, 2006) and the papers they cite, power line frequencies affect the thyroid glands of rats. Exposures of up to two months stimulated thyroid activity, but exposures of three months or more caused visible damage and reduced the production of the thyroid hormones.  On removing the radiation, the visible damage disappeared but the reduced ability to produce hormones did not. If the analogy with cell phone radiation holds good, we can expect their prolonged use to result in obesity in some people. Once established, the effect could be permanent. The prospect of being permanently overweight or being on a life-long diet and feeling perpetually hungry is not appealing.

Not everyone will be affected

Genetics plays an important part in susceptibility to DNA damage, cancer and obesity, so not everyone will be affected by the radiation. However, if one of the underlying causes of both obesity and cancer is DNA damage, there may be some linkage between the two. For example, it is conceivable that people who become overweight as a result of exposure to non-ionizing radiation may also be at some extra risk of developing cancer.

If you are at all worried by this and/or have suffered an unexplained increase in weight or other symptoms of hypothyroidism (e.g. fatigue, depression, weak muscles, muscle cramps, brittle nails, etc.) it would be wise as a precaution to stop using cell phones and cordless phones. At the very least, you should cut their use to a minimum, text wherever possible and take voice calls on speaker phone. On no account, hold them to your head.

Intensified screening doesn¹t entirely explain the jump in thyroid cancers noted in the United States since 1980, and scientists now believe that other
as-yet-unknown factors are to blame.

A new study finds that thyroid tumors of all sizes are being picked up, not just the smaller ones that more aggressive screening would be expected to
detect.

Although, ³some of this increased incidence is due to increased screening finding smaller tumors,² she added.

The findings surprised one expert.

³I wrote a chapter about this for a textbook about a year ago and I came away thinking this [rise in cancers] is a reflection of enhanced diagnostics,² said Dr. Bruce J. Davidson, professor and chairman of otolaryngology-head and neck surgery at Georgetown University Hospital in Washington, D.C. But, ³it is more disturbing that it¹s not just small tumors; it seems to be all tumors,² he said.

An estimated 37,200 new cases of thyroid cancer will be diagnosed this year, according to the U.S. National Cancer Institute. Fortunately, the cancer is
considered highly curable, but the researchers said survival rates have not improved with better detection.

Until now, an uptick in cases seen over the past three decades was attributed to increased use of ultrasound and image-guided biopsy to detect tumors. Some researchers had found that thyroid cancer was diagnosed more often in areas with higher incomes and less in uninsured populations, adding further credence to this theory.

Looking at thyroid cancer cases from 1988 to 2005 reported in a large cancer database, Chen and her team found a higher incidence not just in small
tumors, but across all sizes.

The most pronounced increase was seen in primary tumors under 1.0 centimeters < small ones for which many experts consider it safe to take a wait-and-see approach. The rate for these tumors rose almost 10 percent per year in men (1997 to 2005) and 8.6 percent per year in women (1988 to 2005).

But the authors also saw a 3.7 percent annual increase in tumors exceeding 4 centimeters in men and a 5.7 percent yearly rise in these tumors in women.

³People have looked at background radiation and nothing really has come of that that¹s very useful. And certainly not useful to us in why there would
be a bump in incidence in the last 15 years,² Davidson said.

Chen proposed in the study that environmental, dietary and genetic issues be explored.

The term "24/7" is often used to describe life at one time or another, little did we realize that we were actually creating a self-fulfilling prophecy.

Blackberry's, I-phones, Palm Pilot's, wi-fi, cordless, portable and accessible 24/7 is the way of the world and because of this we are becoming a nation of sleep deprived, caffeine-addicted stress junkies.

Which is what takes us to your body's need for sleep and the serious effects of sleep deprivation. Sleep, or the lack thereof, disrupts every aspect of a bodies function.

Starting with the brain; judgment, impulse control, attention, and visual association are the first affected by the lack of sleep. Continued deprivation can lead to the slowing of motor skills, loss of cognitive abilities and hallucinations. Prolonged deprivation has been shown to lead to psychotic episodes in some cases. The brain requires the body sleep. Even the process of dreaming is necessary for the brain to function at a normal level.

Sleep allows for the heart to reduce output for a significant period of time. Without sleep, the heart does not get to rest. This over an extended period of time may very well lead to hypertension. According to a study at the Mayo Clinic, women may be at an even greater risk than men.

The last segment of this topic is very important, not only because I am a trainer, but because I am also a competitive powerlifter.

A recent study at the University of Chicago Medical school focused on young athletes and how a significant sleep reduction effected their bodies.

Results showed that after the deprivation nights (only four hours of sleep) the athletes metabolized glucose least efficiently and levels of cortisol were also higher during these periods.

Cortisol has been linked to increased body fat storage, decreased mobilization of adipose fatty cells, memory impairment, age-related insulin resistance, and has been shown to impair recovery in athletes.

The importance of this to the typical athlete is obvious, but even the average person who may hit the gym only 3-5 times a week can see why sleep deprivation is something that should be avoided if at all possible.

While researching this topic, I found so much information that it literally took me three days to determine what I was going to focus on for the purpose of this article.

The effects of sleep deprivation on the body are far more serious than I had ever thought and as I read study after study each one suggested we are just now getting an idea of how severely years of poor sleeping habits can affect our lives as well as lead to our deaths, before our time.

So go home tonight, take a melatonin and try to get a full nights sleep and see how much better you feel tomorrow!

Hope these tips help you on your quest for a healthy lifestyle. And it is exactly that, a lifestyle. If you have any questions, feel free to email me at dan4mantx@yahoo.com . Just reference the article in question and I will be more than happy to get back to you!!` Dan Foreman is a Personal Trainer at DCS Fitness.

NEW DELHI: The electromagnetic waves emitted by mobile phone towers and cellphones can pose a threat to honey bees, a study published in India has concluded. An experiment conducted in the southern state of Kerala found that a sudden fall in the bee population was caused by towers installed across the state by cellphone companies to increase their network.

The electromagnetic waves emitted by the towers crippled the 'navigational skills' of the worker bees that go out to collect nectar from flowers to sustain bee colonies, said Dr. Sainuddin Pattazhy, who conducted the study, the Press Trust of India news agency reported.

He found that when a cell phone was kept near a beehive, the worker bees were unable to return, leaving the hives with only the queens and eggs and resulting in the collapse of the colony within ten days.

Over 100,000 people in Kerala are engaged in apiculture and the dwindling worker bee population poses a threat to their livelihood. The bees also play a vital role in pollinating flowers to sustain vegetation.

If towers and mobile phones further increase, honey bees might be wiped out in 10 years, Pattazhy said.— AFP (Bron: http://www.dawn.com/ )

Take a look at these false trees:

Look at some of the stupid places that they have been located! 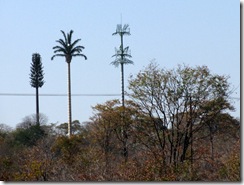