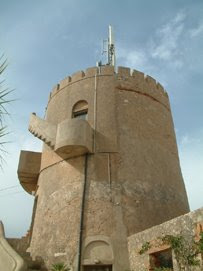 MORE THAN 1,000 residents and visitors have signed a petition to ask for the removal of a telecommunications mast that they say has been erected illegally by mobile telephone companies on a tower near residential houses in Ferragudo, in the Lagoa council.

Around 30 residents gathered near the tower on Thursday, August 21, to protest about the situation, hanging black flags and posters of protest from the windows of their houses and cars.

Graco Trindade, a spokesman for the Comissão Dinamizadora do Movimento para Remoção das Antenas da Torre de Atalaia, a commission set up by Ferragudo residents against the mast placed on the historical tower by telephone providers Vodafone Portugal, TMN and Optimus, spoke about the group’s concerns.

“We have been trying to resolve this issue amicably for more than one year but to no avail,” he said. “The owner of the property, a German man named Frank Reinhart, agreed for the telecommunications mast to be put on the roof of the tower without any licences and seems to be getting away with it.”

A statement sent to The Resident by Vodafone Portugal stated that it is “the Câmara’s responsibility to authorise the installation of support structures for radiocomunication stations, according to the decree law, Decreto-Lei nº 11/2003 de 18 de Janeiro”. The statement added that the station in Ferragudo was authorised under article 15 of that same law.

The group has defined three aims: to get the mast removed, for them not to be placed in a residential area of Ferragudo and for Lagoa Câmara to refurbish the tower and classify it as a monument.

“Lagoa Câmara has recognised that the antennas are illegal, but no concrete action has been taken,” said Graco Trindade.

A spokesman from Lagoa Câmara President told The Resident: “We are aware of the situation and are working towards a solution for all of the parties concerned.”

Owner Frank Reinhart has let the tower to a family, who reacted to the demonstration by waving a communist flag at the assembled crowd. The Resident attempted to speak to the family but they did not wish to comment.

Residents who live as close as 15 metres to the tower are also claiming that the radiation from the mast is higher than the recommended level and may be causing an increase in headaches among the population.

Local resident Olga Jordan said: “My daughter suffers from headaches and has had many tests done. I line my children’s bedroom windows at night with tin foil to try and minimise the effects of the radiation.”

In the same statement to The Resident, Vodafone said: “Vodafone carried out various measurements of the electromagnetic field in the locality. The results of these measurements concluded that the maximum and medium levels of intensity of the electromagnetic field were significantly below the limit that is recommended by the World Health Organisation.”

On Monday, Graco Trindade told The Resident: “Members of the commission were present on Friday at the inauguration of the Fatacil fair in Lagoa and spoke to the Economy Minister, Manuel Pinho and Lagoa Câmara president, José Eduardo about the issue.”

He added: “We will continue our actions until the mast is removed.”

Do you have a view on this story? Email: editor@the-resident.com