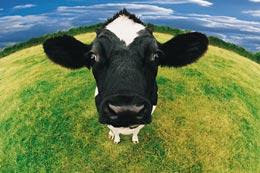 Despite thousands of years of coexistence, exploitation and cheese, humanity seems to have missed an intriguing fact about cows: they like to point north. Or possibly south.

Looking polewards, apparently An analysis of more than 8,000 cows claims they have a statistically significant preference to align themselves in a north-south direction. The team behind this study has also found a similar preference in deer, and believes the animals must be sensing the Earth's magnetic field.

While 'magnetoreception' has been documented in insects, birds and some mammals, the idea that such a prominent example of it could have gone unrecognised for years comes as a surprise. What evolutionary advantage, if any, the cattle might accrue is unclear.

"It is amazing that this ubiquitous conspicuous phenomenon apparently has remained unnoticed by herdsmen and hunters for thousands of years," write Sabine Begall, of the University of Duisberg-Essen in Germany, and colleagues in Proceedings of the National Academy of Sciences1.

Begall's team used satellite photos from Google Earth to analyse the orientation of 8,510 cattle at 308 sites around the globe. The photos were chosen to ensure the animals were clearly visible, standing on flat ground, and not close to water or feeding areas that would influence their position.
"The whole search was quite time-consuming," says Begall. "Sometimes you find several pastures within minutes, and at other times you search and search without finding anything useful."

When the team studied the photos, they found the cows were far more likely to be lined up north-south than to be pointing randomly.

The researchers also undertook field work to analyse the preferred body direction of deer, using observations of grazing red and roe deer in the Czech Republic and also measuring the body prints left by deer resting in snow. In total they checked 2,974 roe and fallow deer in 241 locations. Again the team found a preference to align with the Earth's magnetic fields.

Cow compasses
Begall says that one obvious explanation - animals aligning to maximise heating from the sun - can be excluded. The team did further checking on sites relatively close to the poles - where the difference is greatest between the direction of magnetic north and true north. If the animals were sunning themselves, they would be aligned to true north. "[The cattle] are oriented more to magnetic north than to geographic," she says.

"To confirm the existence of a magnetic sense in cattle, some kind of experimental manipulation will be needed" Ken Lohmann University of North Carolina

Suggestions that cattle align to minimise their profile to chilling winds can also be excluded. "From the red and roe deer data we can say where the wind is coming from," notes Begall. "There is no correlation with body alignment." Also, she adds, if wind was a factor you would see more random alignments, rather than a global preference to point north-south.

Other animals, such as bees and termites, have been previously shown to align to magnetic fields, says Joe Kirschvink, a geobiologist at the California Institute of Technology at Pasadena, who has worked extensively on magnetoreception. All it requires is some kind of sensory organ to pass magnetic information to the brain.

"The biophysics of a receptor that can provide this information is really simple," he says. "All you need is one cell with a chain of tiny magnets, and we know that almost all higher animals contain cells with them."

Animal magnetism
Given that mole rats, mice and bats can perceive magnetic fields, it is plausible in cattle and other mammals, say experts.

"This is a very interesting finding," says Ken Lohmann, biologist and magnetoreception expert at the University of North Carolina at Chapel Hill.

"The results are fascinating and suggestive, but one limitation is that the study is based entirely on correlations. To confirm the existence of a magnetic sense in cattle, some kind of experimental manipulation will eventually be needed; for example, this might involve disrupting the magnetic field by attaching strong magnets to the animals and demonstrating that this has an effect on orientation behaviour."

Begall's team may soon be able to answer this point. Further work, not published in this paper, has revealed a possible clincher: near powerlines, where strong local magnetic fields are present, the cows become misaligned.