FLASH : A new slap in the face for the mobile phone networks. 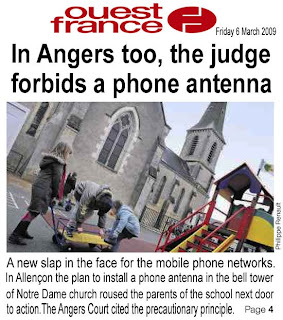 The three news stories below are all from France and have been sent by the Next Up Organisation.

There have been several success stories recently in France, involving electrical and electro magnetic pollution, that have been heard in courts of law.  Courts and the legal system are best way to deal with problems caused by electro magnetic radiation.  We have much scientific evidence that shows harm being caused by EMR and at last, people in authority must tell the truth when giving evidence.  I encourage you to use the legal system, to fight your own injustices.

Thank you Next Up.

Subject: FLASH : A new slap in the face for the mobile phone networks.

- A new slap in the face for the mobile phone networks.

- Residents living near the future site of a phone mast vs. the mobile phone company Orange.

- A judge in Angers Tribunal de Grande Instance (District Court) has forbidden the Orange phone company to install a mobile phone antenna in the bell tower of a church right next to a school.

- This judgement is a first in France, since sentence has been passed before the event.

- The judge explained that his decision was based specifically on the precautionary principle.