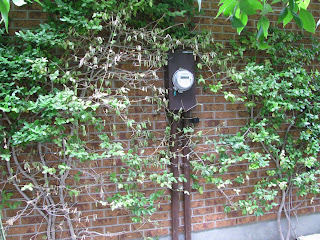 After receiving the information below and seeing the photograph which is attached, I went to the house in Stratford, Ontario, to see this dying shrub for myself.  I was shocked at the amount of harm caused to the plant.  I was able to see that the dying and sick leaves were much worse than the photograph shows.

The smart meter had only been installed about two months ago yet there were several leaves that had completely withered up, as if they had been dried in place.  Many other leaves showed signs of disease, with dozens of small dry spots spread across the leaves.

The damage spread out for at least  three feet from the smart meter.  Leaves several feet away were very healthy, they were bright green with no signs of harm.

Another meter attached to the house next door was about eighteen feet away and many leaves on the tree, which were close to that meter, were changing colour.

I measured the microwave radiation between the houses and it constantly spiked over two thousand microwatts per square metre.  The radiation was almost continuous, one powerful spike after another.  This City wide Wi Fi, smart meter system is very powerful, highly dangerous and must be stopped.  Fighting this danger is part of my election platform in the Stratford Municipal Election.

Note:  More detailed photographs of the plant, will be taken and made available, when the weather improves.

I am taking the opportunity to forward to you some photos of the decay in vegetation immediately surrounding our meter on the side of the house. We never noticed what was going on until the euonymous started to drop leaves in the vicinity of the smart meter just this week. Since we have the climbing plant growing on 3 sides of our house, I took a quick walk around to see if it was some sort of fungus affecting the plant or what the source of the decay could be. My investigation revealed that only the euonymous around the meter has been affected. I've included a photo of a healthy branch farther removed from the meter as a comparison.

My guess is that any studies into related health issues from smart meter emissions have probably been ignored or overlooked by municipalities.

It would be interesting to see if anyone else has experienced noticeable effects from their smart meters.

I think people need to be made aware of the dangers of smart meters.

Who will monitor the health effects on urban populations?

This photo today shows the progression of vegetative decay around the smart meter. I should mention that before the smart meter was installed, vibrant green vegetation completely surrounded the meter. A robin nested above the meter last year.

Just shown on National Television throughout Canada.  See the video:

Some Ontario parents are concerned that Wi-Fi in schools is making their children sick, the CBC's Ioanna Roumeliotis reports

Next Up NEWS / in progress

We wish her a complete recovery!

Ultrastructural Change of Cerebellum in Exposed Rats to 3mT ...

These findings indicate that long-term exposure to EMF has detrimental effects on central nervous system at cellular level.

To sign up for WEEP News: newssignup@weepinitiative.org  (provide name and e-mail address)